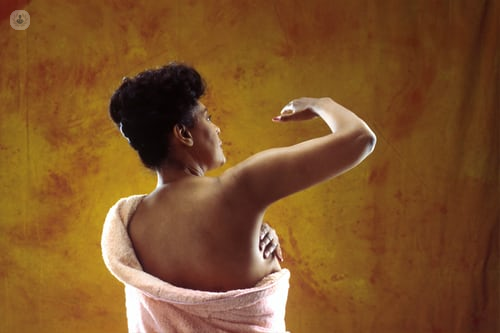 What is a sentinel lymph node biopsy?

A sentinel lymph node biopsy is a surgical procedure that identifies whether cancer cells have spread beyond a primary tumour and into the lymphatic system. It is most commonly used when treating breast cancer and melanoma.

Where are the sentinel lymph nodes located in the body?

How is the procedure performed?

To locate the sentinel nodes, a substance such as a blue dye is injected into the area around the tumour before a mastectomy or lumpectomy is performed. The dye travels the same path that cancer lymph nodes would take, which enables the surgeon to determine the few nodes that are likely to test positive for cancer.

An alternative option is for a weak radioactive solution to be injected into the area near the tumour, which is taken up by the lymphatic system and travels to the sentinel nodes in order to remove them.

Are there any risks to a sentinel lymph node biopsy?

It is generally a safe procedure. All procedures carry a small risk, but with a biopsy, these may include:

Any cookies that may not be particularly necessary for the website to function and is used specifically to collect user personal data via analytics, ads, other embedded contents are termed as non-necessary cookies. It is mandatory to procure user consent prior to running these cookies on your website.